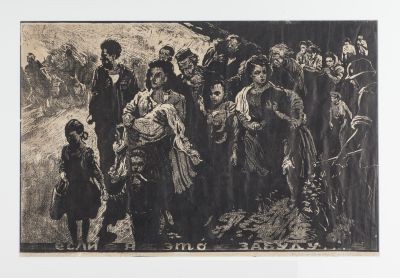 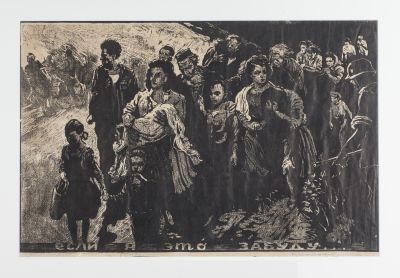 In childhood attended cheder. For a short time, he was working as a painter in the studio of shop signs. Participated in the First World War. Volunteered for the Red Army in 1918.  After the demobilization, he lived in Kiev. In 1927, he took classes in the painting workshop of famous painter Ash, in 1927 graduated Kiev State Art Institute, from 1929 to 1939 he worked at the Dovzhenko Film Studio in Kiev.  In 1938, he created the first well-known paintings such as “Meeting with the Jewish agronomist of the Jewish collective farm”, “Competition on the farm.” This picture, as well as the others, were exhibited at the Kiev House of Arts at the personal exhibition in 1941. All the pictures from the exhibition burned out during the shelling of Kiev in 1941.

“We will live” was painted in 1965, after visiting Fort IX Kaunas . In 1965 – exhibition in Jekabpils, but in Daugavpils – in 1966, presenting portraits of Jeanne and Johanna Lipke, “Shulamith”. In 1967 an exhibition took place in Culture Palace “WEF”. Kuzkovski created the painting  “Transistor” (linocut), “David and Goliath” (pastel), “Stepmom” in 1967.  He dedicated linocuts “We will live”, “Hava Nagila” to the Jewish theme (the last mentioned one is kept in the museum “Jews in Daugavpils and Latgale.” The artist has presented these work to  Z. Yakub). Another exhibition took place at the Riga Officers House in 1969.
At the end of 1969, he immigrated to Israel, where he created the pastel “Simchat Torah in Kfar Chabad,” popular poster “Let my people go,” and painting “The last path”, which is located in Knesset. He also painted portraits and posters.