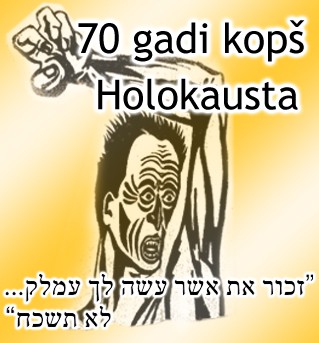 EURO 2012 Qualification play Latvia-Israel will take place at SKONTO stadium, Riga on June 04, 2011 at 19:30. According to the initiative of Association “Shamir” the play is dedicated to the memory of Jewish sportsmen killed in Latvia during the Holocaust. The initiative was supported by Latvian Football Federation and UEFA.

…It is 70 years since tragic events of Latvian and European history, when flourishing and rich Jewish community in Latvia before the WWII was almost completely exterminated by Nazis. More than 75 000 Latvian Jews were killed and more than 26 000 of Western European Jews were deported here and exterminated in Rumbula and Bikernieki. Latvian Football Federation, Jewish association “Shamir”, Riga Ghetto and Latvian Holocaust museum joins together in memorium of these tragic events.
Latvia was a birthplace for numerous world famous figures such as Solomon Michoels, Mark Rotko, Oscar Strok, Isaiah Berlin and others. Jewish community in Latvia has long traditions of sports, having three sports societies with branches in towns of Latvia: Maccabi, Hapoel, and Hackoah. Football, box, weight lifting and other competitions took place in many places of Latvia. Most of Jewish youngsters took up sports as a way to spent free time, but a number of famous sportsmen perished in the Holocaust, such as S.Garber (football player, member of National football team of Latvia), M.Pasman (weight lifter, a member of Resistance in Riga ghetto), M.Feigin (famous chess player) and thousands of others.
This year Jewish community of Latvia celebrates 450 years of Jewish settlement in Latvia and commemorates 70 years of the Holocaust. In the match between Latvia and Israel on June 04, 2011 we will remember sportsmen / victims of the Holocaust in Latvia. “The life is going on and despite all the dark pages of the history we are able to built new democratic multicultural European society together,” says CEO of Association “Shamir”, Riga Ghetto and Latvian Holocaust museum Rabbi Menachem Barkahan.