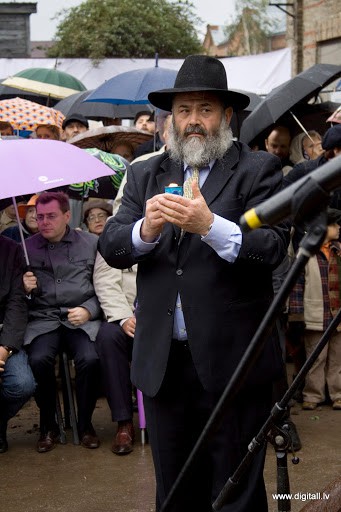 This is to announce that Riga Ghetto Museum exposition is being launched on September 21st, 2010 at Maskavas 14a (entrance from Krasta srteet). More than 70 000 local Jews and nearly 20 000 Jews deported from Western Europe were executed in Latvia in the World War II. Riga Ghetto Museum is located in the historical part of the city near the borders of former ghetto. Riga ghetto territory itself is almost unique in Europe in terms of the absence of any significant architectural changes within past 60 years.

The opening of the first line of exposition should be considered as the first indeed significant step to the further development of Riga Ghetto Museum. There are stands with the names of more than 70 000 Latvian Jews who faced the Holocaust exposed at the museum area, covered by the stones from the streets of Riga Ghetto. The museum has also opened the photo exhibition, dedicated to anti-Semitism propaganda, Holocaust in Latvia, the Resistance and the Righteous Among the Nations.

This is impossible to commemorate the Holocaust without the consideration of the history of Latvian Jewry that counts 450 years. Therefore, a part of the overall exposition is dedicated to the past that was lost by Latvia and worldwide after the Catastrophe.

Riga Ghetto Museum is not just a museum. It will become the significant memento of the dreadful events that occurred in the history of Latvia and should never ever be repeated again. The Museum is becoming a center of culture and education, a source of tolerance and mutual respect.

Vice-major of Riga, ministers and public figures, diplomats and business men took part in the ceremony.